MADE FOR THIS MOMENT 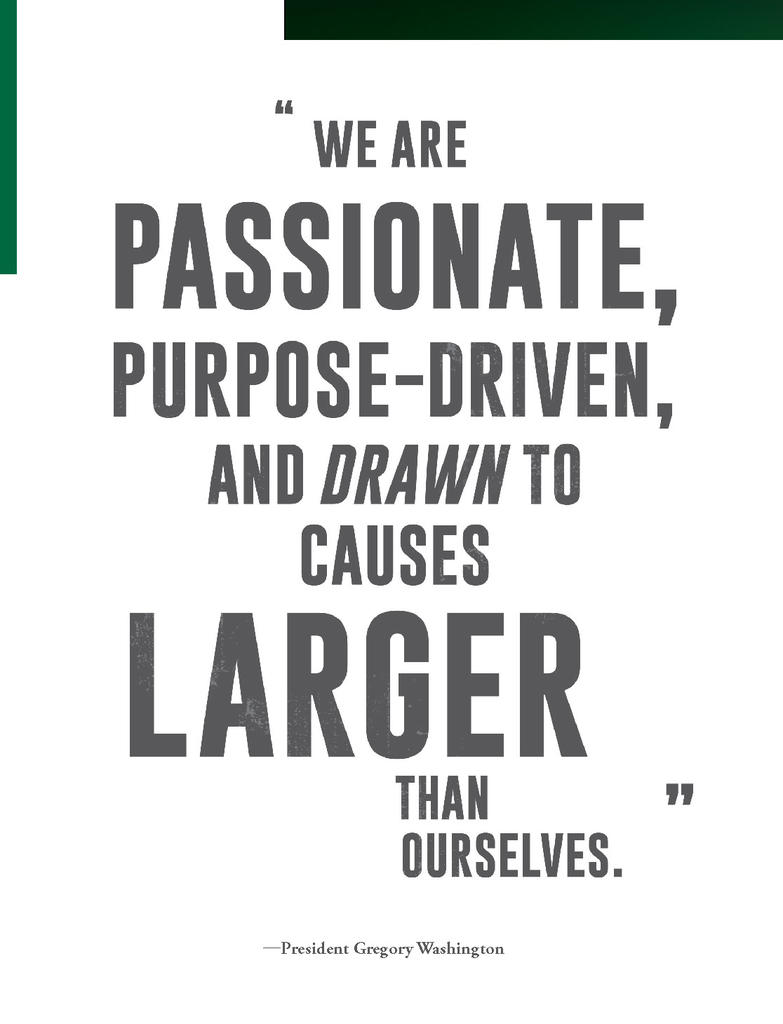 From our beginnings in 1957 until today, George Mason University has been driven by, connected with, and dedicated to the needs of our community. Launching as an education center aimed at serving adult learners, returning veterans, and Northern Virginians needing college-level instruction, Mason evolved from a center into a University of Virginia branch campus, and then into the largest and most diverse public research university in the Commonwealth of Virginia.

In our relatively short lifespan, we became America’s youngest-ever R1 research university. We currently manage one of the nation’s fastest-growing public research portfolios. We are Virginia’s largest public university, and ranked as its most diverse and its most innovative. Mason has traveled a nontraditional path to these milestones. We are here because we did things that no one thought we could do. We are here because we dream big and ACT ON our dreams.

We are passionate. Purpose-driven. And drawn to causes larger than ourselves.

April 7, 2022, will mark 50 years from the day that Virginia Governor A. Linwood Holton signed legislation to separate George Mason College from the University of Virginia to better meet the educational needs of Northern Virginia.

This signature set in motion a half century of progress that has fueled Northern Virginia’s transformation from a bedroom community of Washington, D.C., to one of the most dynamic regions in the country.

We opened our first campus in Fairfax in 1964 on 150 acres from the City of Fairfax. By 1968, we graduated our first class of 58, and by 1971 we were offering and awarding graduate degrees.

By 1979, we had acquired a law school and created a presence in Arlington using the space of the former Kann’s department store, which we quickly outgrew and razed in 2020 to make room for an innovative and energy-efficient new building that makes better use of that footprint.

In 1994, we broke ground on 120 acres in Prince William County that was donated by IBM and a number of local real estate developers. That parcel is now part of an innovation park in that county and home to a biosafety level 3 research facility, one of only 13 in the country, and a forensic science research laboratory that is one of only 8 in the world.

Mason has always prioritized meaningful connections, leveraging our proximity to Washington, D.C., and the nearby community resources, and being responsive to the needs of the region and the commonwealth.

Some of those needs were and are workforce based—producing nurses and health care workers, teachers, engineers, and now technology workers. Local health organizations, such as Inova Health System, and the regional public school systems are among the largest employers of Mason alumni, who number more than 210,000 strong, with two-thirds working and living in this region. 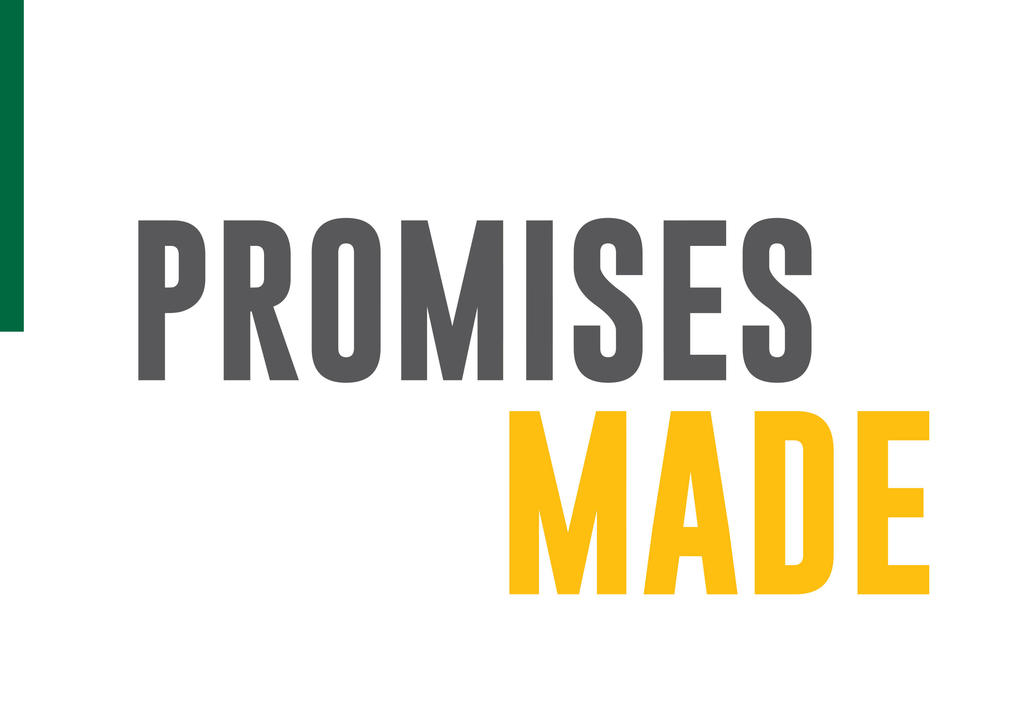 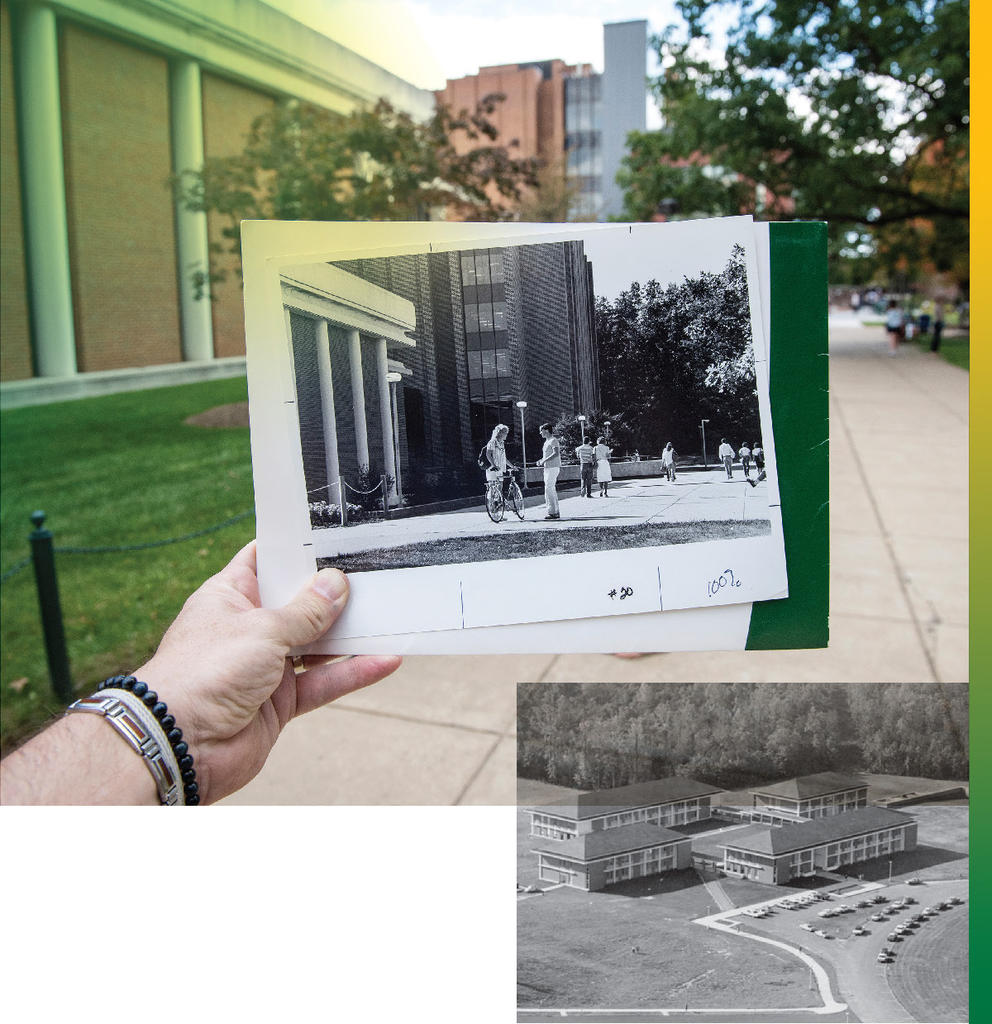 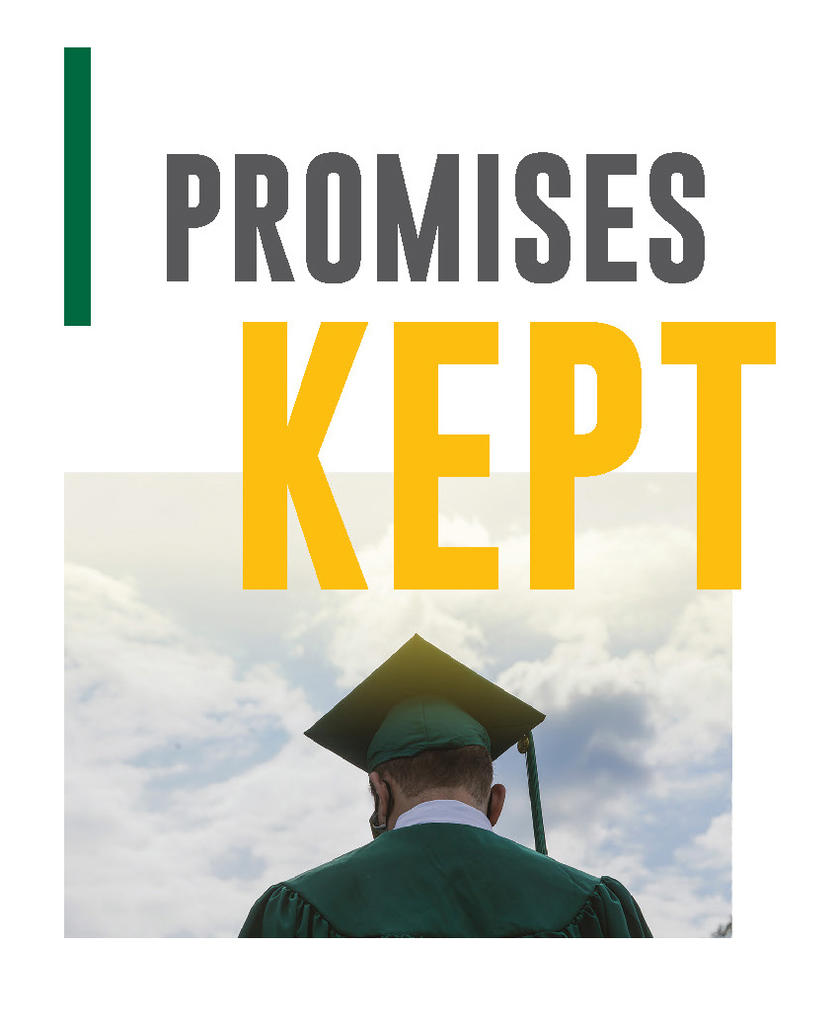 50 YEARS LATER…MUCH HAS CHANGED, AND MUCH REMAINS THE SAME… 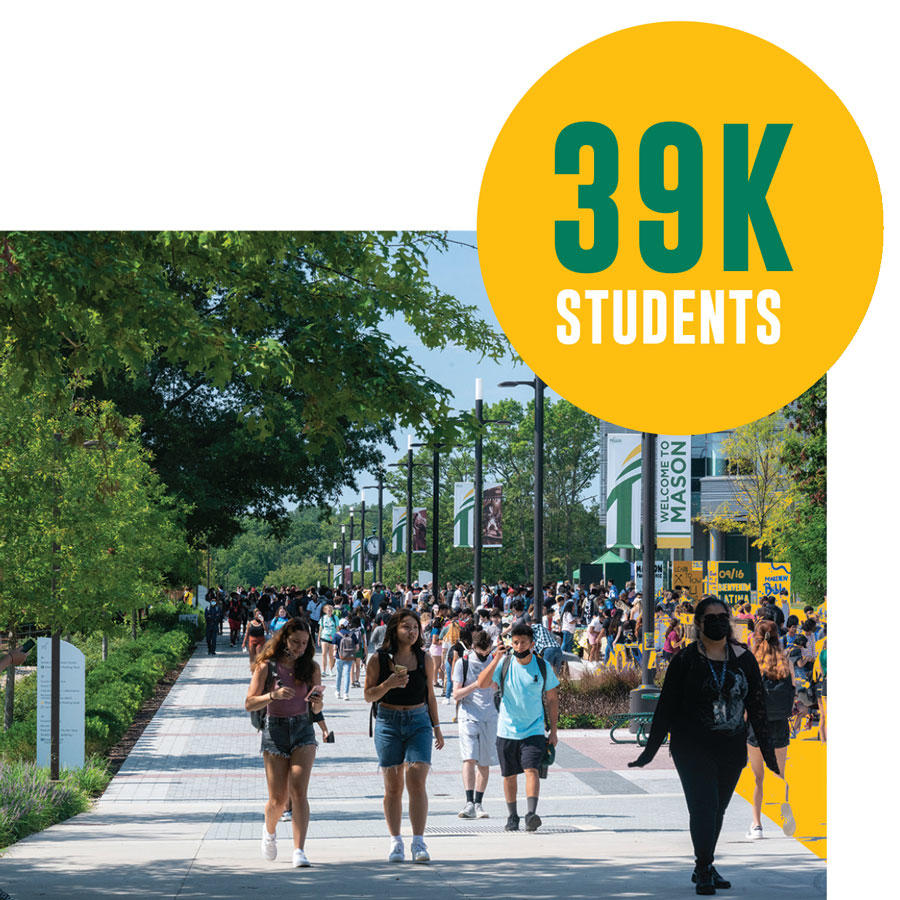 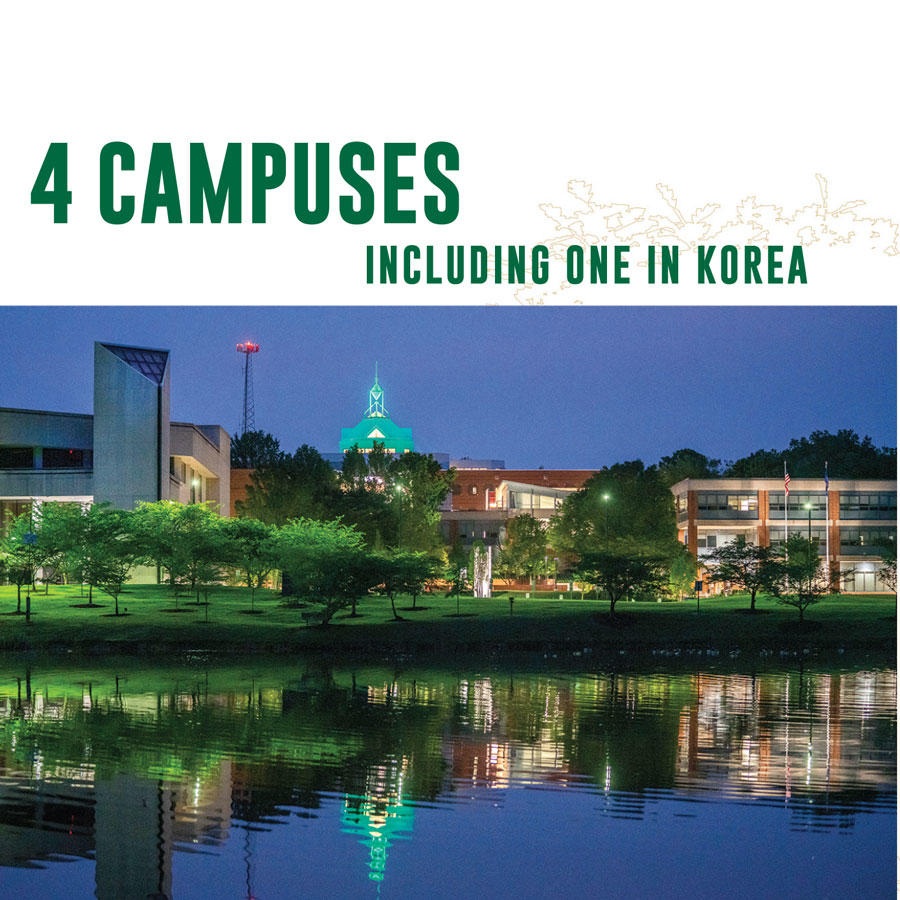 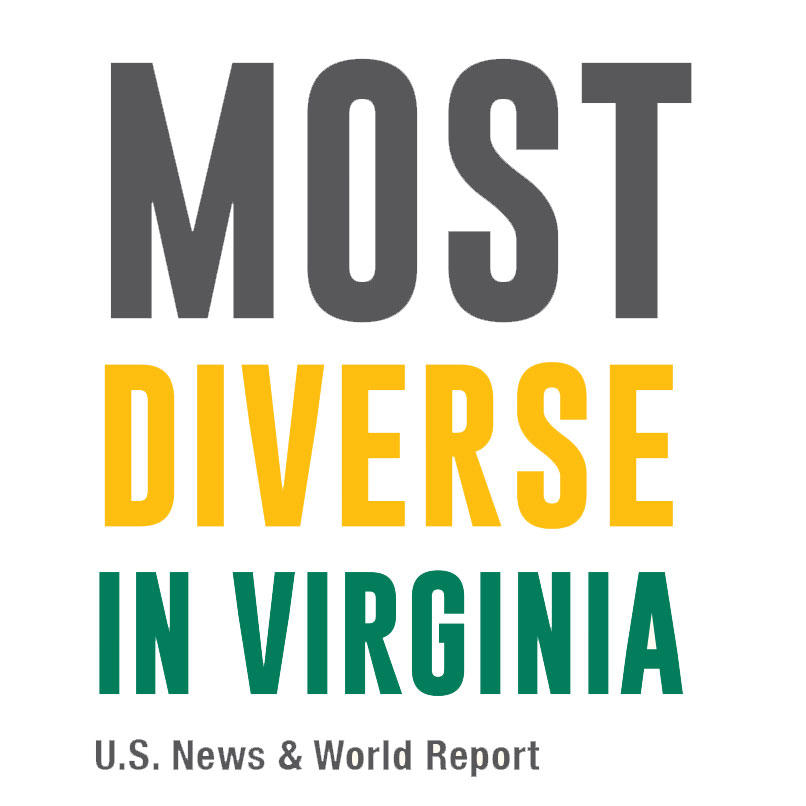 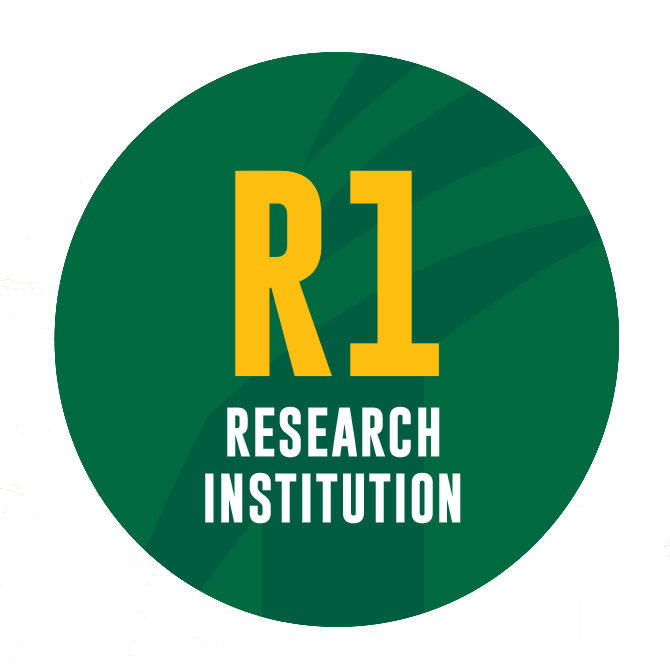 with one of the fastest-growing portfolios in the nation. 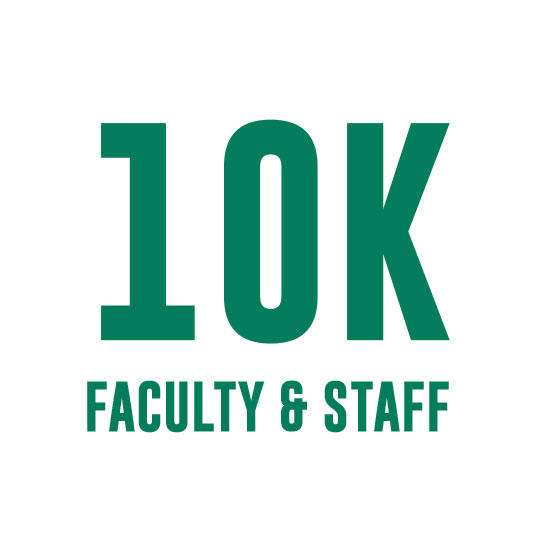 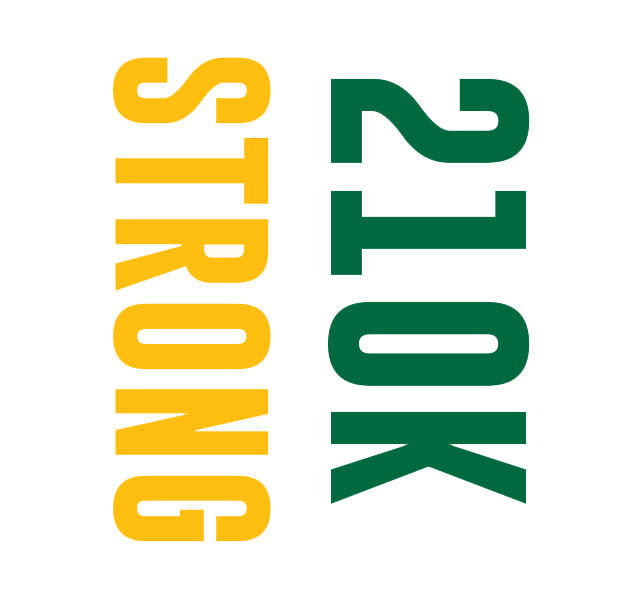 with two-thirds of our alumni working and living in this region. 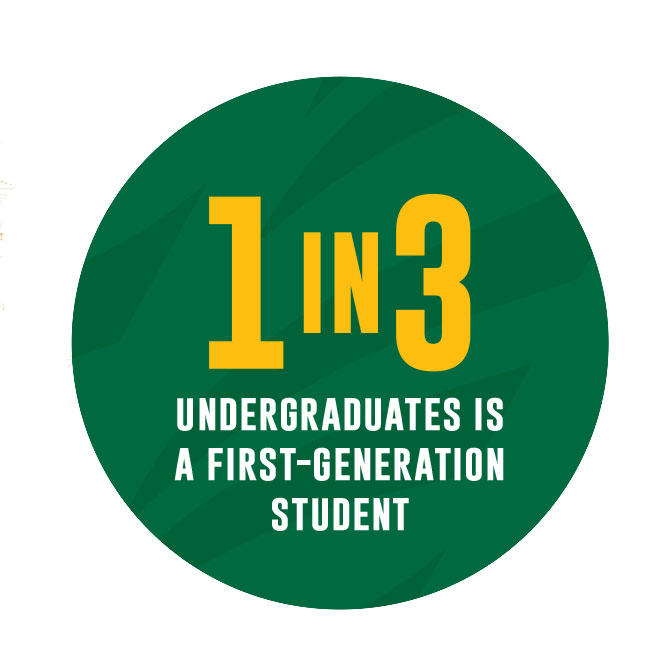 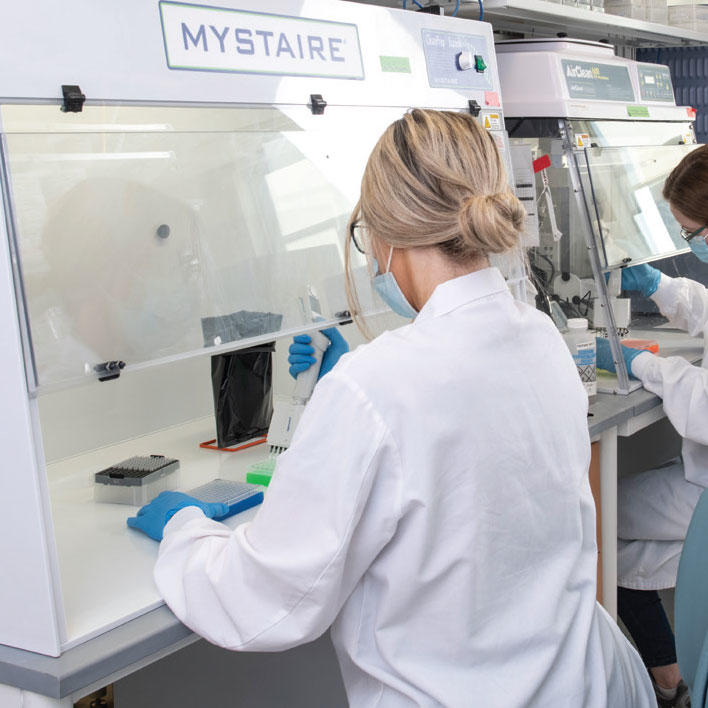 Home to a biosafety level 3 research facility, one of only 13 in the country, and a forensic science research laboratory that is ONE OF ONLY 8 IN THE WORLD. 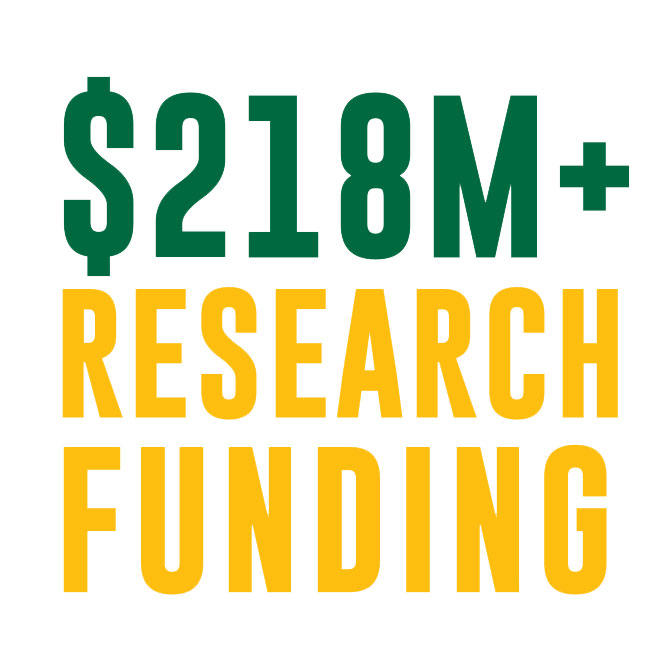 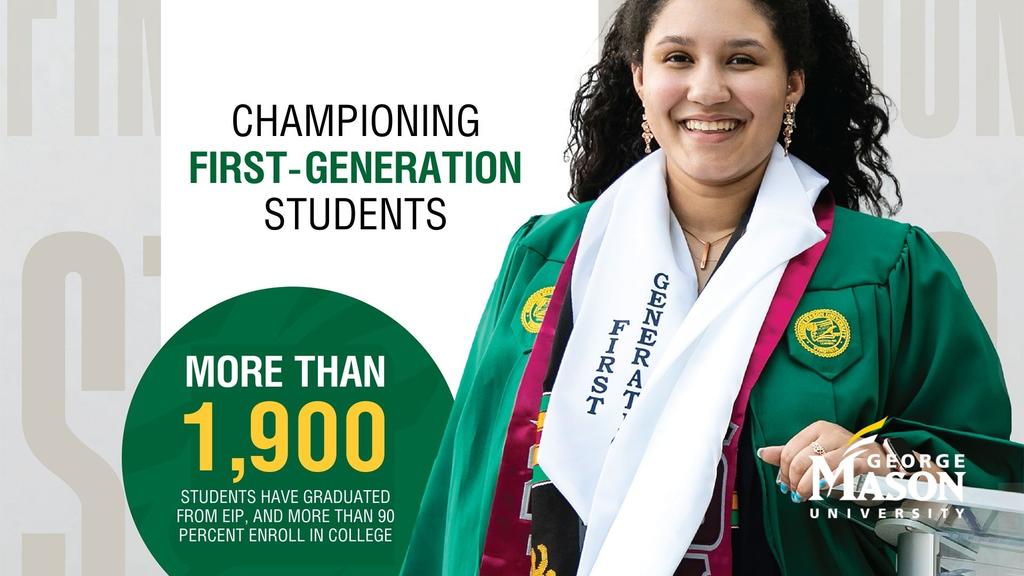 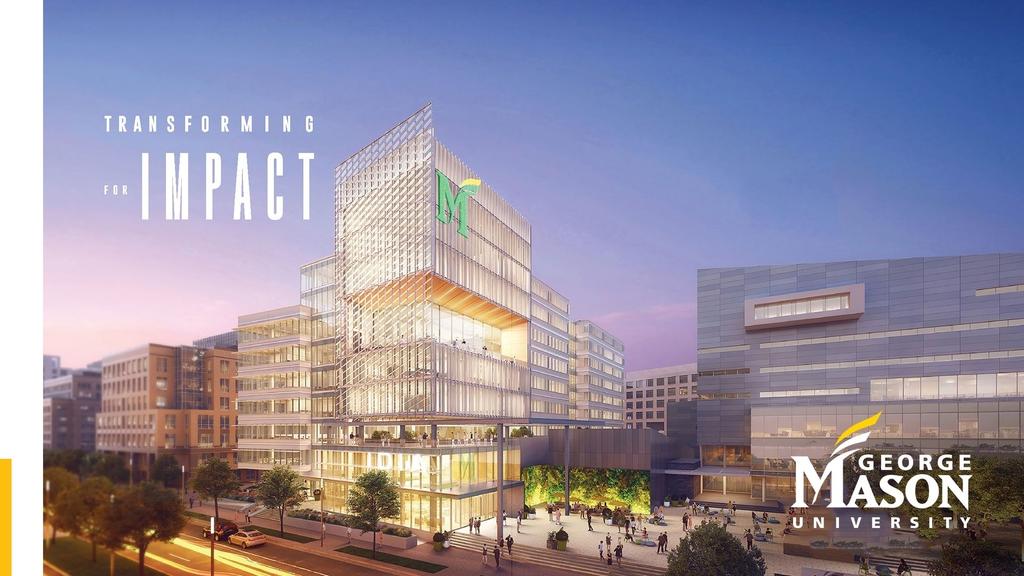 Today’s college graduates must confront interlocking existential threats: the climate emergency, public health, an economic sea change, and a society grappling with inequality and threats to the democratic process. For our graduates, rescuing our future to ensure a healthy planet, healthy people, healthy economies, and healthy societies will be the central organizing cause of the rest of their lives. It is our job to conduct research to find solutions to our overlapping grand challenges—and to educate students to solve them. 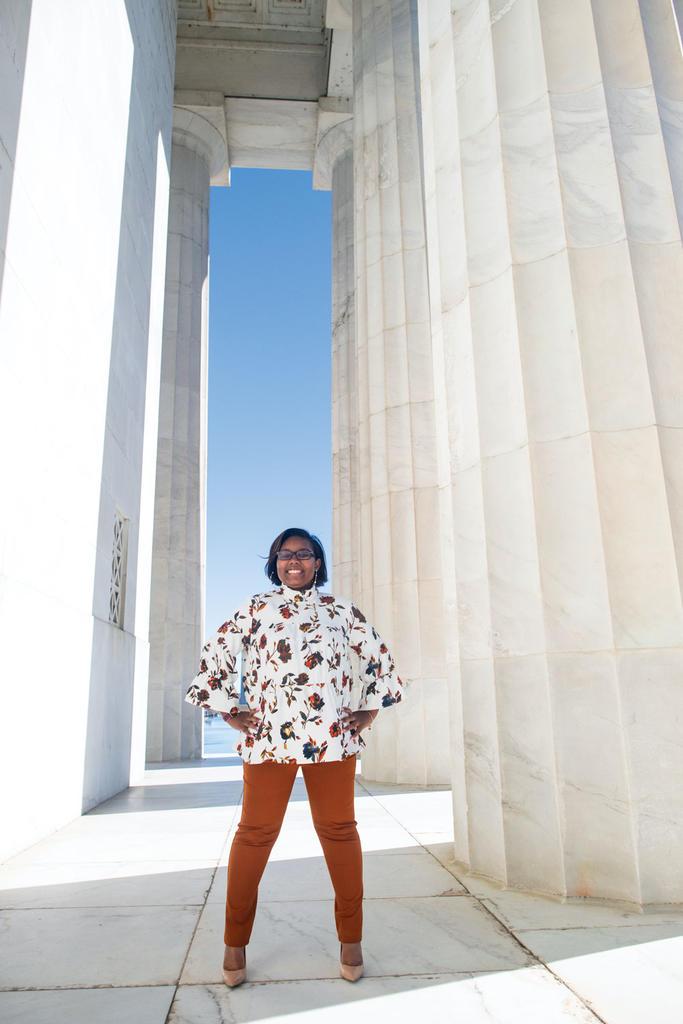 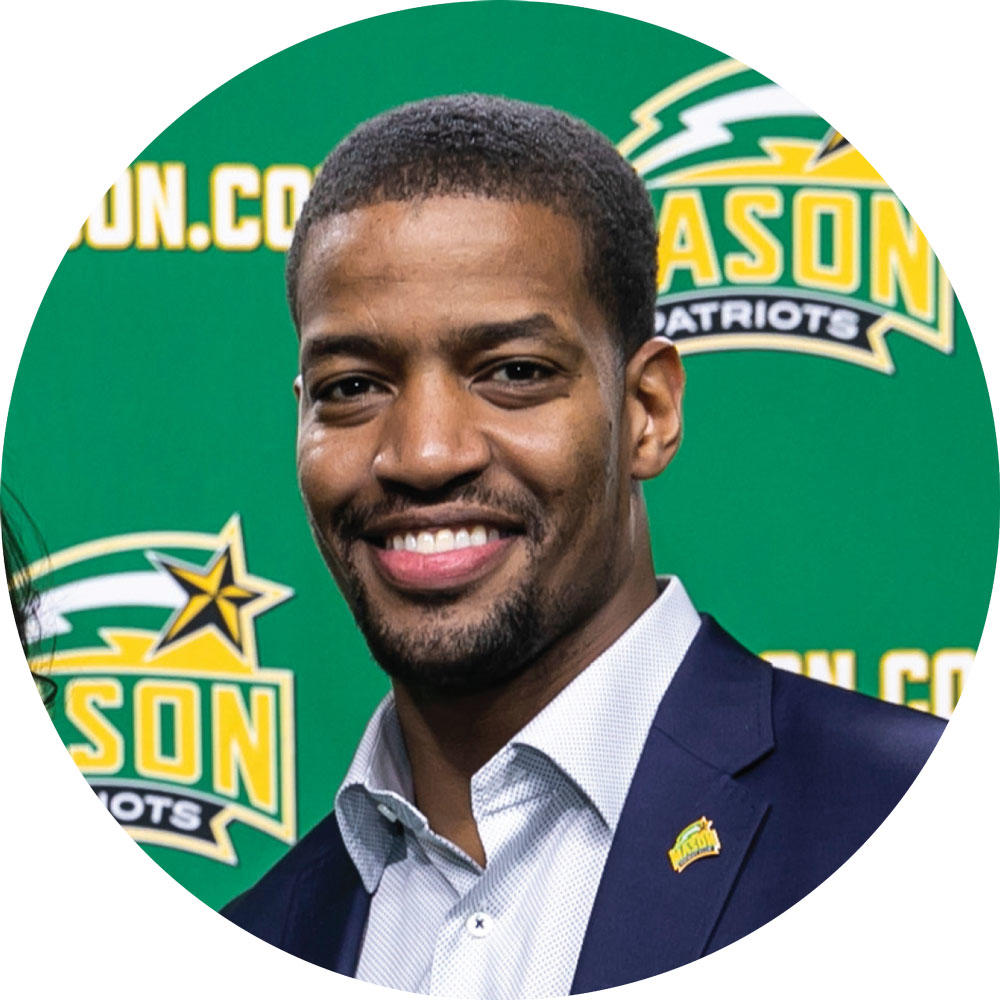 In March 2021, Mason selected rising star Kim English to become the 11th head coach of the men’s basketball program. “It’s going to become a global brand,” says English. “[Mason will] recruit kids from all over the world to come to this place and do something special.” 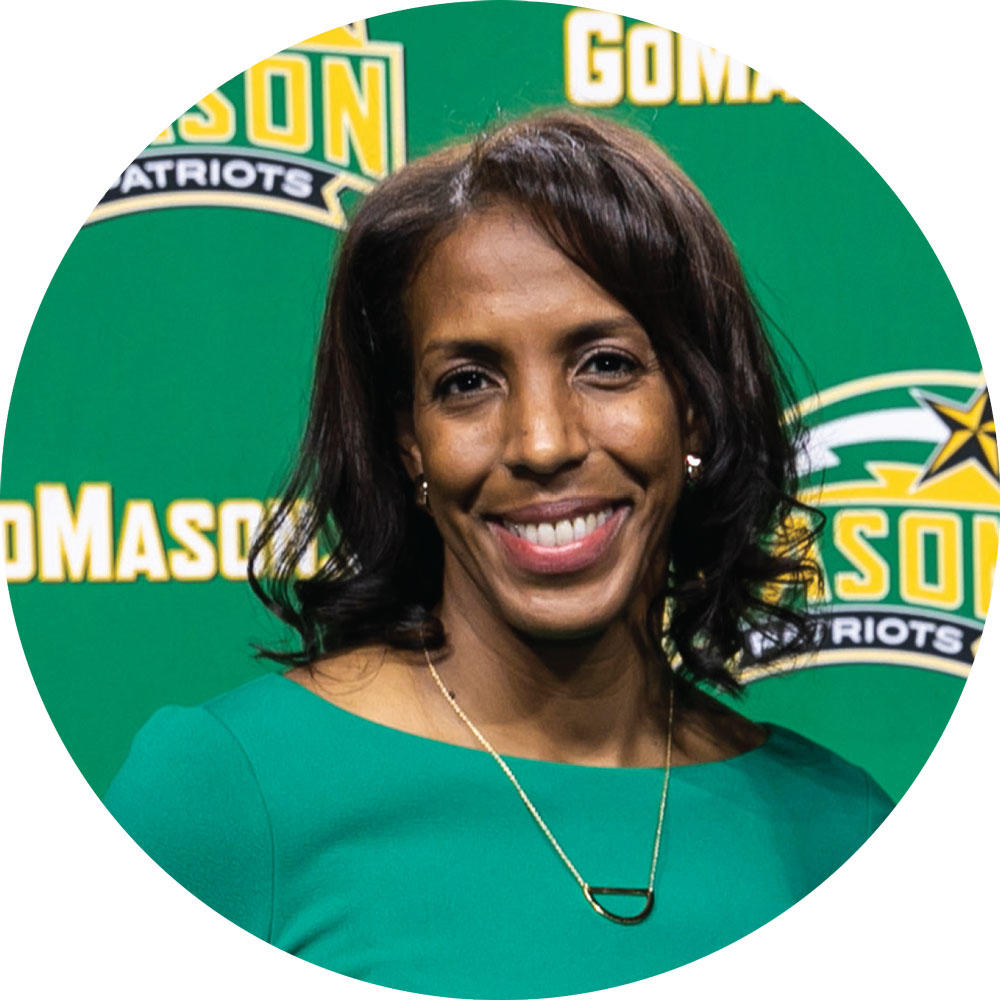 Mason wanted a coach with a championship mentality to build the women’s basketball program. The university found all that and more in Blair-Lewis. “A long time ago, I realized it wasn’t about the X’s and O’s,” she says. “It’s about pouring into the lives of young people to make them better now and for the future.” 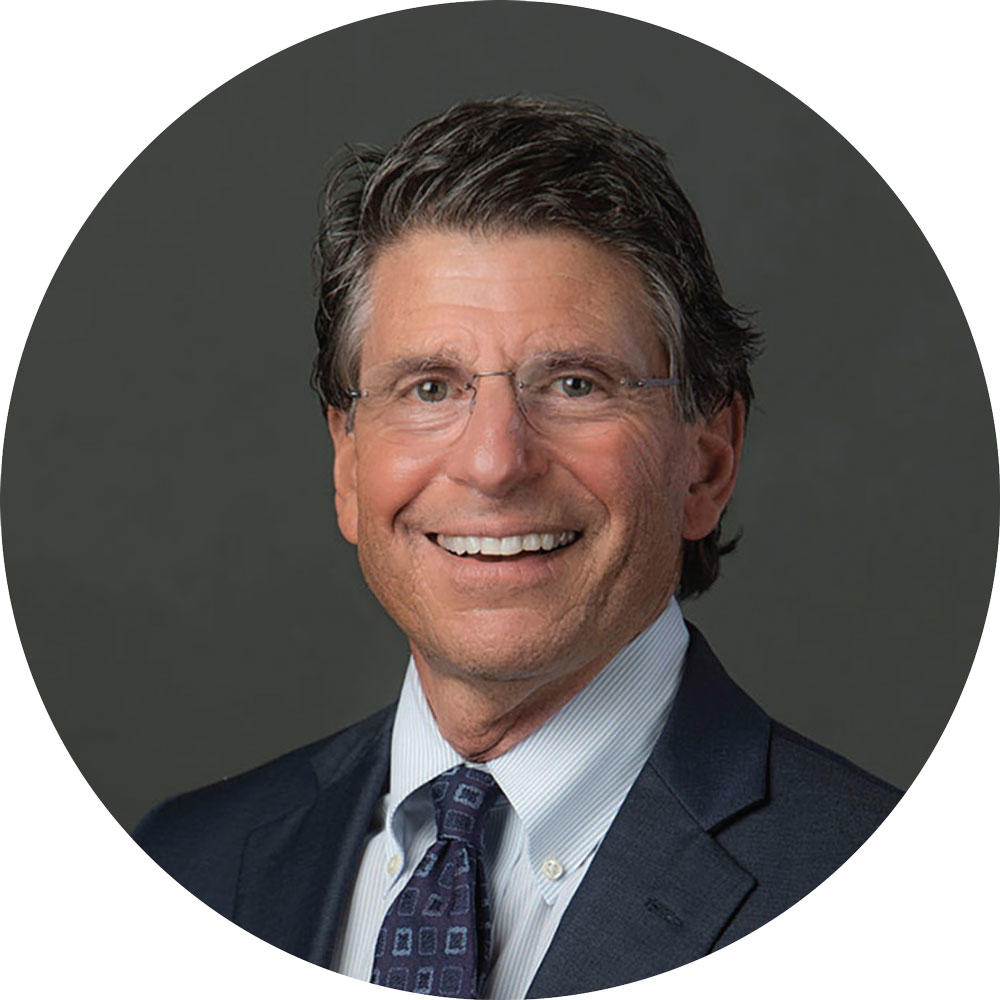 Dean Ken Randall comes to the Antonin Scalia Law School with a track record as a trailblazer and innovator. Named by U.S. News & World Report as one of the last decade’s “Transformative Deans,” Randall propelled the University of Alabama School of Law’s U.S. News ranking from 96 to 21, at the time the greatest jump in rankings history. “I admire Scalia Law’s entrepreneurial spirit and its commitment to intellectual diversity,” says Randall. “In the spirit of Antonin Scalia, this school encourages the robust and respectful debate of ideas, and that makes it unique among law schools.” 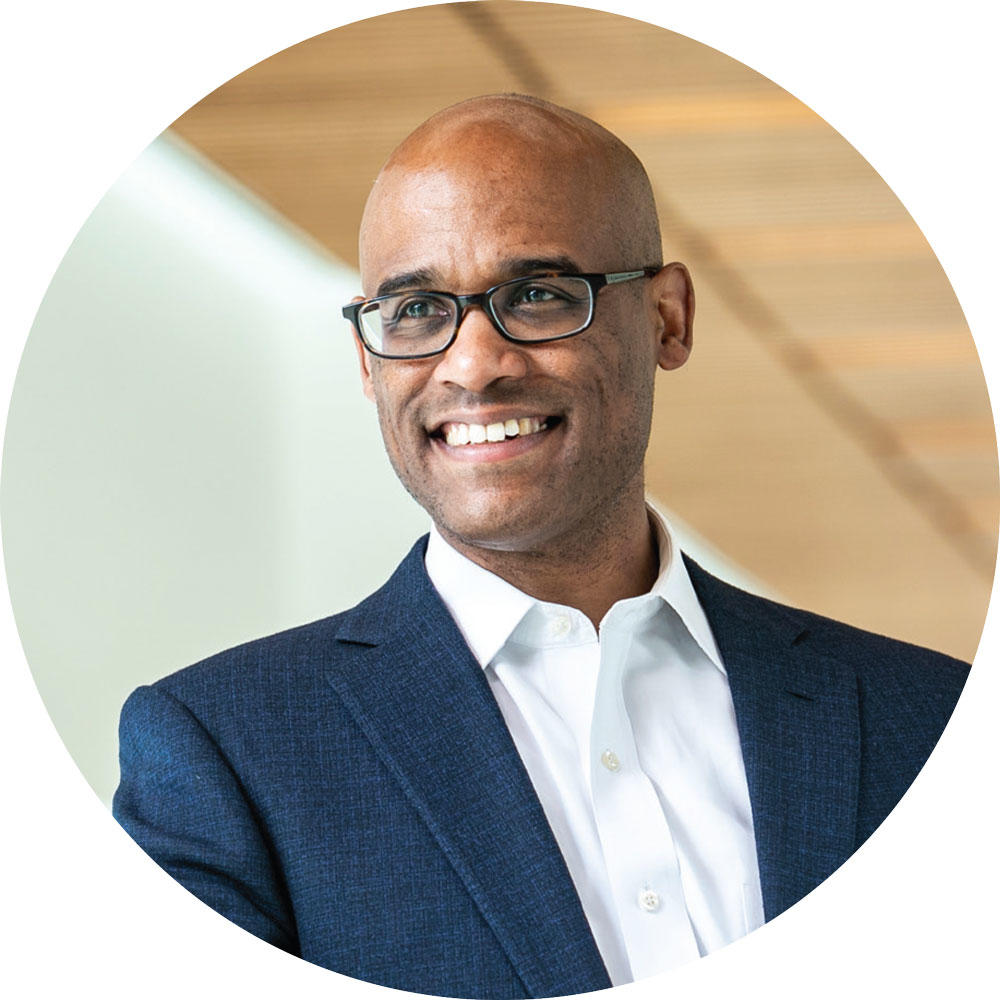 As the former program director for the National Science Foundation’s $38 million Innovation Corps Program, Marshall helped researchers reduce the time it takes to translate promising ideas from the laboratory to the marketplace. Now he’s taken on the challenge to expand one of the fastest-growing research portfolios of any public university in the United States. “It is an honor to lead Mason’s research enterprise at such a critical time of change and growth,” says Marshall. “I look forward to supporting Mason’s community of scholars and our stakeholders in their efforts to create new knowledge…and build enterprise through research, innovation, and entrepreneurship.” 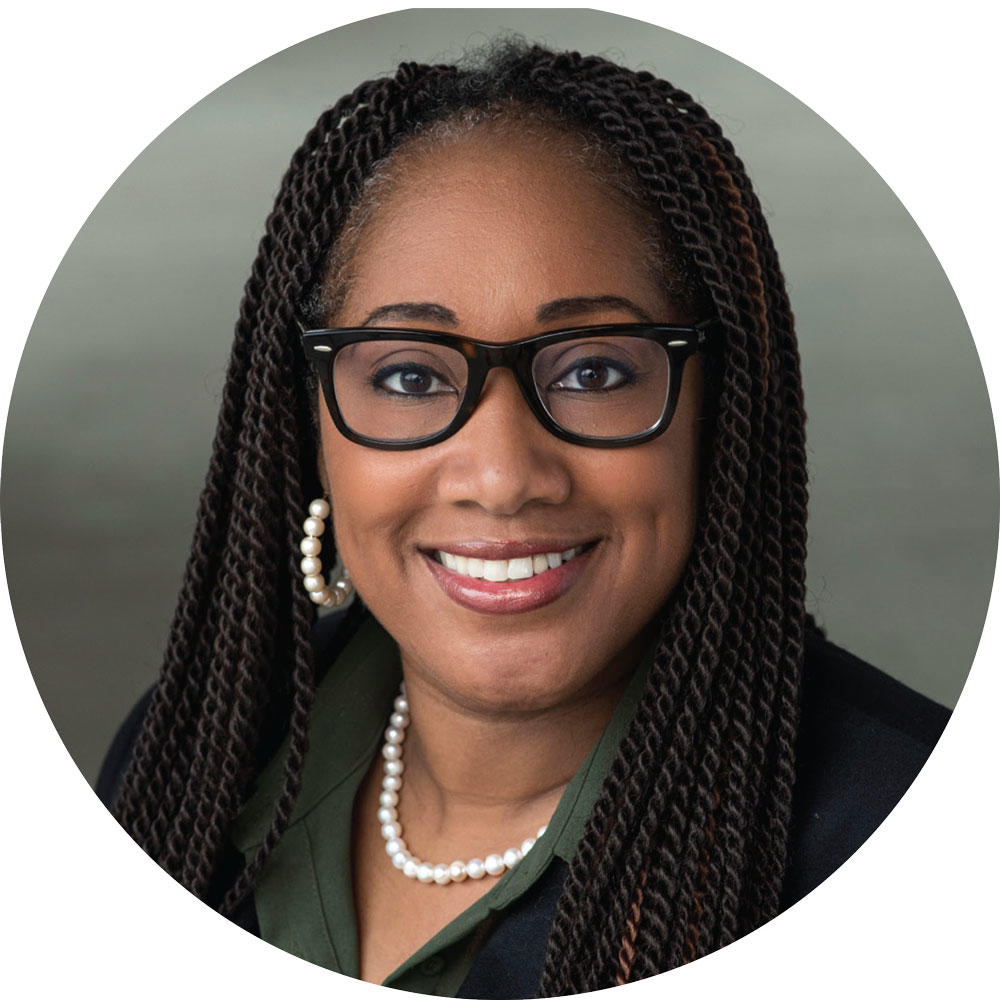 Born and raised in Virginia, Sharnnia Artis returns to the commonwealth to help its largest and most diverse university create a more fair and inclusive culture. Artis says, “I am committed to being a tireless champion working with our students, faculty, staff, alumni, partners, and community.”

"I BELIEVE IN MASON’S VISION TO BECOME A NATIONAL EXEMPLAR OF ANTI-RACISM AND INCLUSIVE EXCELLENCE IN ACTION,” ARTIS SAYS. 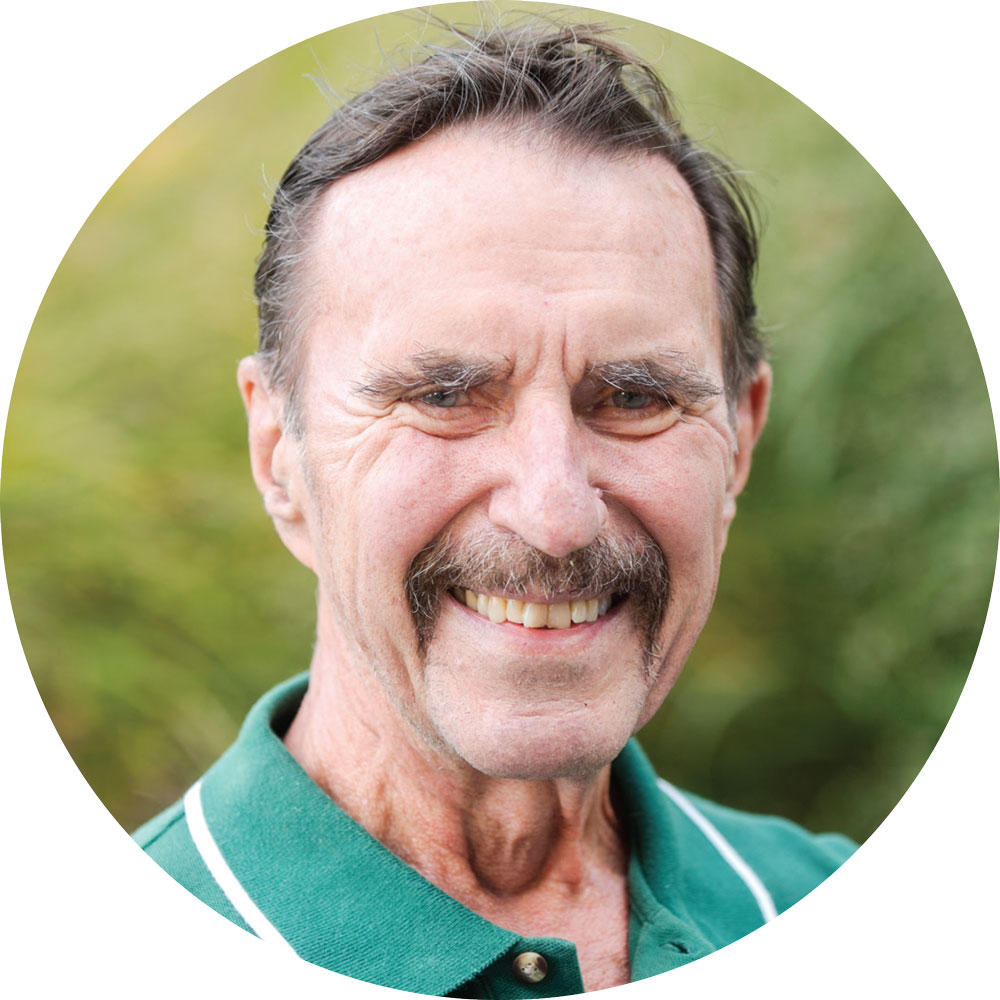 Jim Trefil is only the third George Mason University faculty member to reach the milestone of 50 years of service. A theoretical physicist and leader in science literacy, Trefil has written more than 50 books, making science accessible for a lay audience. “To live in the United States in the 21st century, you really should know a little bit about science,” says Trefil. “You don’t have to be a scientist, you don’t have to do calculus, but you should be able to read the newspaper. Then if somebody is talking about whether the use of stem cells is moral, you should know what a stem cell is.” 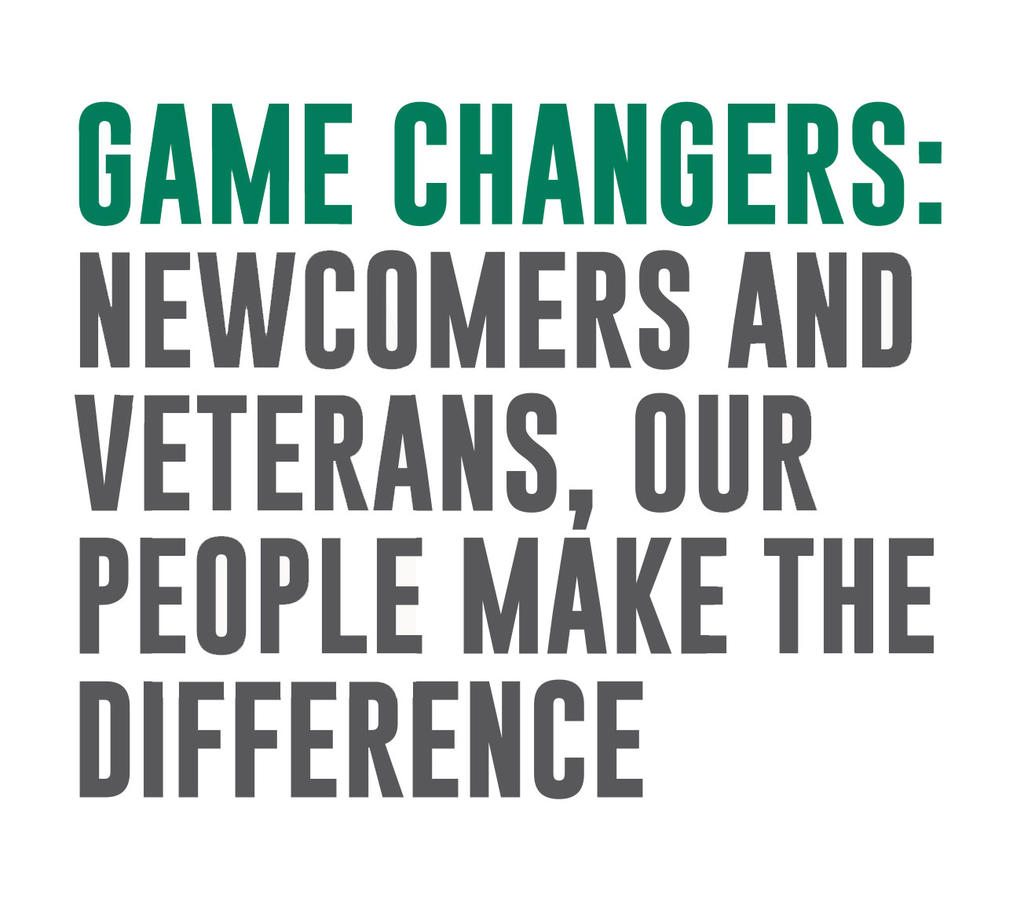 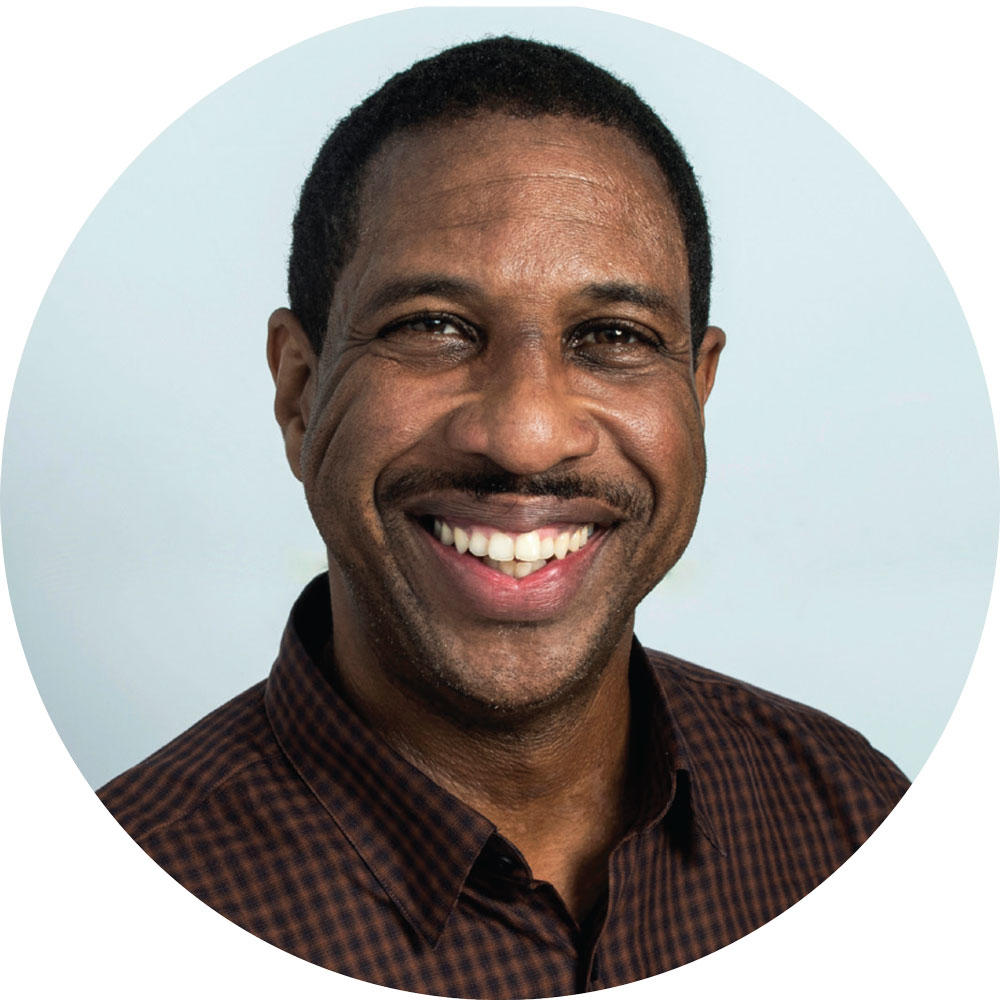 With a life journey that has taken him from some of the toughest neighborhoods in the country to earning a PhD in physics from Stanford, and appointments at Florida Institute of Technology and NASA, astrophysicist Hakeem Oluseyi is traveling a path that seems to be written in the stars. “The joy of my career as an academic is working with undergrads and helping people to improve their lives,” Oluseyi says, adding, “Mason’s student body is my target audience—working-class people that are aspirational and ready to be tomorrow’s leaders. I’m hoping to influence them.” 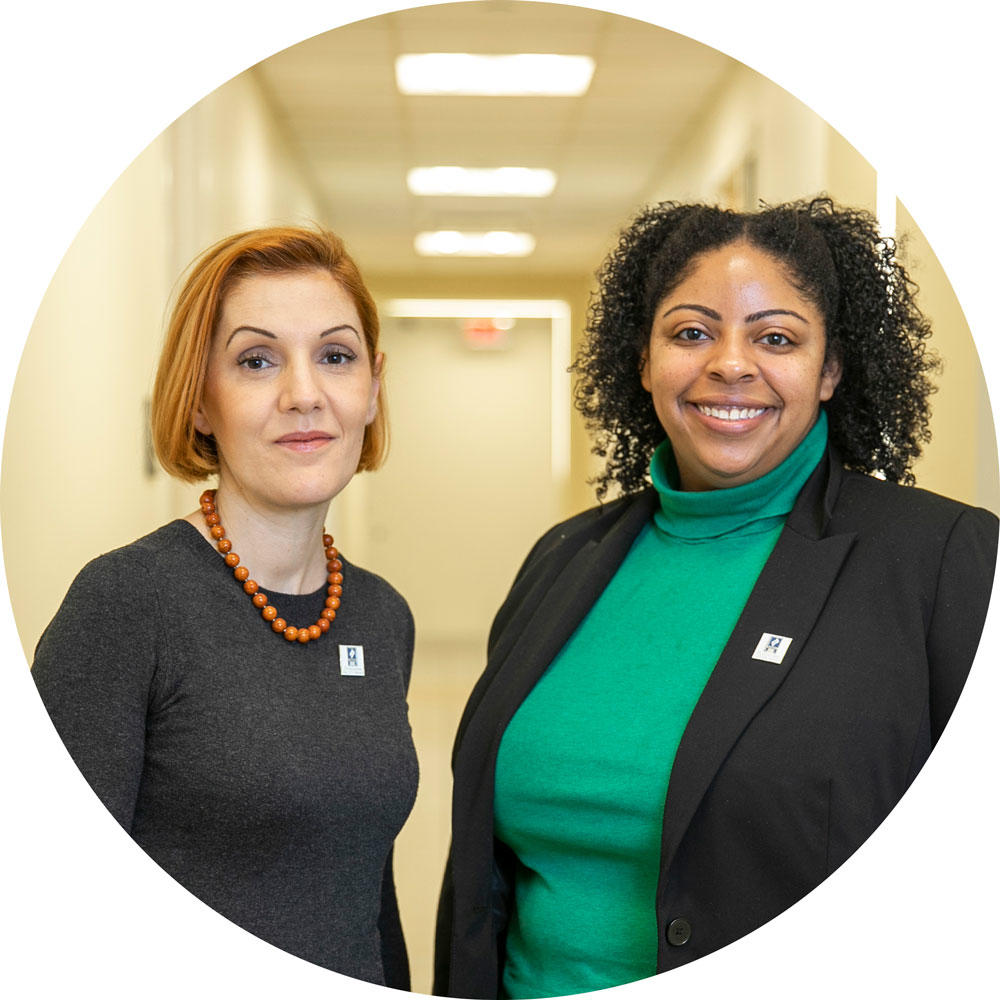 Leah Adams and Amarda Shehu were named Mason’s Outstanding Faculty Award winners by the State Council for Higher Education of Virginia (SCHEV) for 2022. Adams’s research focuses on psychosocial aspects of health promotion and health risk, with an emphasis on racial/ethnic minorities, women, and other vulnerable groups. Shehu focuses on novel algorithms in artificial intelligence and machine learning to bridge between computer and information science, engineering, and the life sciences. 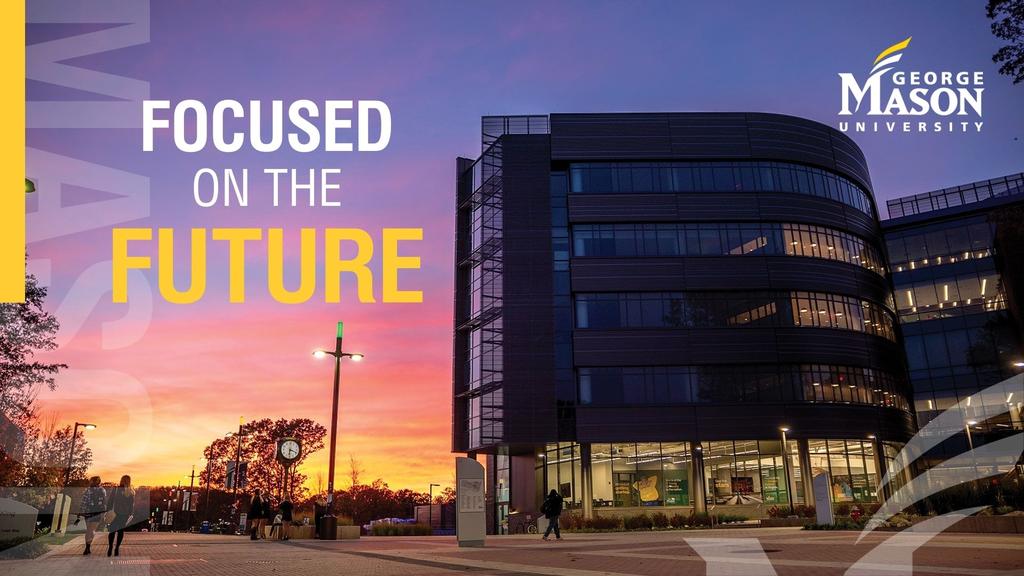