Getting real about racism, diversity and inclusion 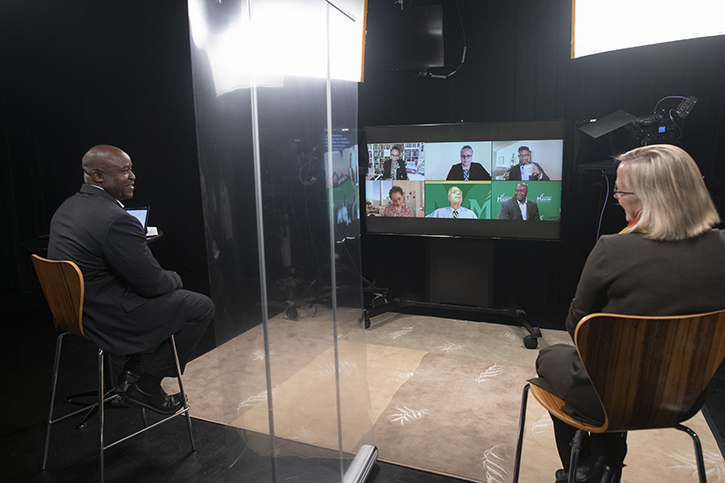 Understanding what anti-racism, diversity and inclusion mean for George Mason University was just one of the goals of Monday’s Freedom and Learning forum hosted by President Gregory Washington.

Ensuring a common definition of the terms helps create meaningful dialogue, and helps the Mason community understand the work of the Anti-Racism and Inclusive Excellence Task Force. The group was formed by Washington in response to both the high-profile death of George Floyd at the hands of police and the nationwide racial justice movement.

“We shouldn’t – we cannot – run away from these discussions,” Washington said. “We have to have engagement on these topics.”

Washington asked the task force to look deeper into Mason’s environment, policies and practices to see what changes are needed to ensure the university can remain a national model for diversity and inclusion.

Monday’s hour-long open dialogue, which can be viewed here, touched on many of those key issues.

Washington was joined in the GMU-TV studio by moderator Ann Ardis, the dean of the College of Humanities and Social Sciences. Panelists included Wendi Manuel Scott and Shernita Parker, the co-chairs of the Anti-Racism and Inclusive Excellence Task Force; Provost and Executive Vice President Mark Ginsberg; Creston Lynch, the associate dean for University Life; and Milagros “Millie” Rivera, Mason’s director of Diversity, Inclusion and Well-Being.

Manuel-Scott, a professor of history in the School of Integrative Studies within CHSS and the former director of the African and African-American Studies Program, said the aim of the task force was to create an anti-racist institution that fully supports the entire Mason community.

“Race matters,” she said. “Race, historically speaking, has always mattered in the United States of America. … Race mattered in George Mason’s revolutionary era, to the civil rights, to the Obama era, to the age of COVID that we are all existing in right now. Race matters, and therefore we must engage in strategies and policies that help to disrupt those structures so that we can create a more inclusive institution.”

Eradicating the practices, structures and traditions of racial bias at Mason won’t happen overnight, but Washington and the other panelists expressed confidence that the Mason community can serve as a national exemplar of anti-racism, reconciliation and healing.

Interpretations can differ, so Washington made a point of clearly defining all the terms at the outset, most notably characterizing anti-racism as “a verb, in that it’s a form of action against racism and also the systematic racism of marginalized groups.” In other words,  he explained, it’s not enough to believe that racism is wrong; an anti-racist has to consciously take action against racism in all its forms.

“Diversity encompasses race, ethnicity, class, gender, sexual orientation, ability, as well as cultural, religious or other affiliations,” he said, while “inclusion is the intentional and ongoing acceptance and engagement of diversity as it relates to diverse groups.”

Parker said that the work of the task force and its many committees shows how the Mason community is living the university’s values.

“To thrive together we have to recognize our interdependence, our connection to each other and that as a community, it is critical that we make sure all voices are heard,” Parker said. “…we will not and cannot thrive individually and as a community if we are not conscious of the challenges that we face as it relates to diversity and inclusive excellence, and that we work actively to address and overcome those challenges.”

Mason is the state’s largest, most diverse public research university with more than 38,000 students, a majority of whom are students of color. But those numbers are not reflected in a faculty comprised of just four percent African-Americans. Improving those numbers will require a multi-pronged approach, but will be a high priority, Rivera said. Studies have shown that a more diverse staff leads to stronger student success outcomes, particularly among underrepresented groups and first-generation students.

Efforts to make the university more inclusive should be of paramount concern to all students, not just those of color or marginalized groups, Ginsberg said.

Washington said that he welcomes respectful dissenting voices to the conversation as part of free speech.

Manuel-Scott said she looked forward to the day when all minds and bodies can experience the complete support of the university community and be their ancestors’ “wildest dreams.”

“It’s an ongoing process,” she said, “but it’s righteous and good. Together, we are creating a better institution.”

The Leadership, Education and Development (LEAD) Office and the Office of the President have been co-sponsoring the Freedom and Learning Forums since 2014.