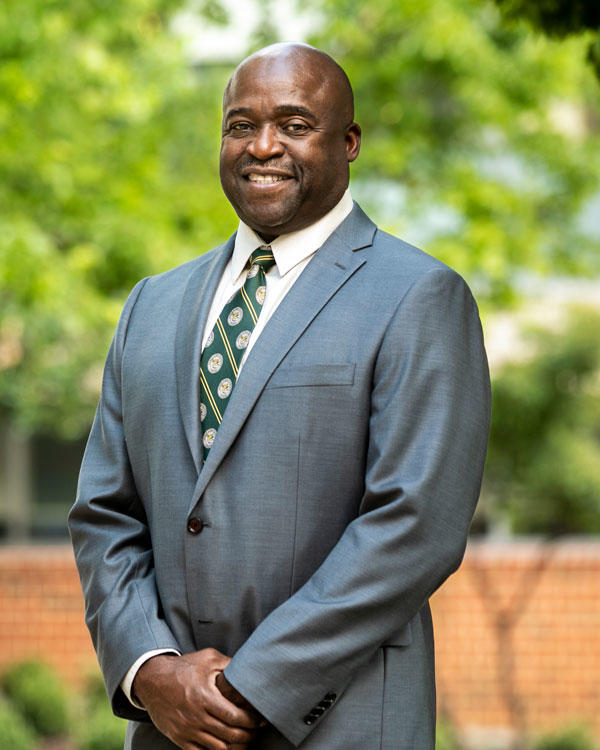 George Mason University President Gregory Washington leads Virginia's largest and most diverse public university into its second half-century, positioning it for long-term success as a beacon of educational access for all.

Washington launched his Mason presidency in July 2020 with a series of initiatives to create new academic and entrepreneurial pathways for all Virginians. He also opened or broke ground on academic facilities on all three campuses across the university’s 847 acres, and established a task force to ensure fairness in university practices and policies.

Mason restructured its research enterprise, with sponsored research expenditures increasing both years. Enrollment has grown to over 39,000. In addition, Mason posted its third-highest fundraising year in 2021-22 despite the ongoing economic challenges from the pandemic.

Washington strengthened Mason’s commitment to access by creating the Mason Virginia Promise (MVP), a path to a Mason degree or help starting a business for any Virginian who aspires to either goal. MVP expands Mason’s national award-winning ADVANCE Program Partnership with Northern Virginia Community College to select community colleges throughout the state. As Washington says, “Mason should be the ultimate Point B university, regardless of a student’s Point A.”

Washington established the President’s Innovation Advisory Council to bring together industry, local government, K-12 education, and non-governmental organizations to form an innovation ecosystem with Mason as its hub. On Mason’s campus in Arlington, now known as Mason Square, Washington marshaled the largest public-private partnership in Mason’s history, Fuse at Mason Square. Fuse will house faculty and students working with the Institute for Digital Innovation and their partners, and graduate programs from Mason’s new School of Computing, the first of its kind in Virginia.

On the Science and Technology Campus in Manassas, the university developed partnerships to simultaneously break ground on the new Life Sciences and Engineering Building and the Innovation Town Center and University Village at Innovation projects.

To serve local employers, Washington established the Mason Talent Exchange to upskill and reskill the Northern Virginia workforce for positions in emerging and high-demand fields.

His Mason Innovation Commission convened many of the university’s most forward-thinking faculty, staff and administrators to conceive strategic recommendations. This effort served as a precursor to a university-wide strategic planning effort, culminating in the release of Mason’s Strategic Direction, “All Together Different,” in 2022.

Washington launched the Anti-Racism and Inclusive Excellence (ARIE) Task Force to examine and eradicate any practices and traditions of institutional racism at Mason while positioning the university as a national leader for the advancement of anti-racism, reconciliation, and healing. In April 2022, as part of Mason’s 50th anniversary as an independent institution, the university dedicated the Enslaved People of George Mason Memorial, the culmination of years of research by a team of Mason faculty and students to contextualize the contradictory life and work of the university’s namesake.

In July 2022, Washington co-led the formation of the 120 Initiative, a group of Washington, D.C.-area university and college presidents who are tapping experts from their institutions to advance actionable solutions to reduce gun violence in the United States. As Washington says, “We believe in science and data, and gun violence is a public health crisis.”

Washington guided the university through the pandemic by implementing a safety plan that included surveillance testing and rapid-return saliva testing developed by Mason faculty for quick identification and isolation of positive cases. Mason was one of the first universities to offer COVID-19 antibody research screening for students, faculty and staff. Washington’s third month on the job, a Richmond Times-Dispatch editorial praised his leadership on the public health crisis: “Universities should serve as laboratories for COVID-19 best practices and George Mason University is a great case study to start with.” The editorial went on to say that Washington “has impressed us early with his steady hand.”

Through campus and mobile clinics, the university partnered with local and state health departments to vaccinate about 120,000 Virginians, including students and employees at Mason, the 24th-largest employer in the Greater Washington region according to the Washington Business Journal.

Washington, the first Black president at Mason, is the former engineering dean at Ohio State University and the University of California, Irvine. In his nine years at UCI as dean of the Henry Samueli School of Engineering, Washington significantly expanded enrollment in the engineering school, hired the most diverse cohort of faculty with more than 50% of his 60+ hires being women or from underrepresented groups, assembled the most diverse leadership team in the School’s history, established the University of California’s first student makerspace, and formed the OC STEM Initiative, one of the nation’s first STEM ecosystems, in Orange County, California.

Washington launched his academic career in 1995 as an assistant professor in the Department of Mechanical and Aerospace Engineering in the College of Engineering at Ohio State University. He became an associate professor in 2000 and a professor in 2004, earning several teaching awards. Washington began serving as the associate dean for research in 2005 and from 2008 to 2011 served as interim dean of the Ohio State engineering school, one of the largest in the country.

An accomplished researcher, Washington specializes in dynamic systems, with an emphasis in the modeling and control of smart material structures and systems. Washington has conducted research for the National Science Foundation (NSF), NASA, General Motors, the Air Force Research Laboratory, and the U.S. Army Research Office, among others.

A first-generation college graduate, Washington is a New York City native who attended high school in North Carolina. He earned bachelor’s (1989) and master’s degrees (1991) and his PhD (1994), all in mechanical engineering, at North Carolina State University.